Recently there has been a video circulating of an interview done with a “scientist” named Boyd Bushman.   Most likely a fake video showing “proof” of aliens.  Even though many times these videos are faked, many people still believe in such beings.  Myself, I do believe in other life outside our planet.   Does our government secretly work with them, who knows.   What we do know is there is a not so “secret” base called Area 51.  Now don’t jump to conclusions, I’m not at all saying our government works with them.  What I am saying is why is that this base is more heavily secure then all of our government buildings in all of D.C. PUT TOGETHER.  Hell the government didn’t even acknowledge that it existed until 2003.  I do believe Area 51 is where they build and fly experimental aircraft, such as the B2 Stealth Bomber and the SR-71.  Yet a guy can jump the White House fence, run across the lawn of what should be the most secure building in our country and actually get in the door.  Yet in Area 51 if you cross into “their domain”  YOU WILL BE SHOT.  The picture below is taking from one of the many signs around Area 51.  If you are a non believer, I’d like you to answer this question.   If our universe is so massive, how can it be that we are the only ones in it? 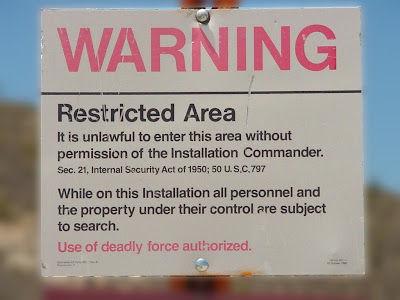